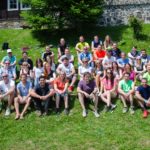 First year of Spationomy is over

The first cycle of Spationomy project concluded as the Summerschool in Maribor in June 2017 had finished. It was really fascinating to observe, how dynamic was interaction among students and staff during the Summerschool 2017, especially during simulation game. From our own experiences as well as from students’ feedback, it seems that the Spationomy idea has proven to be beneficial for both students and staff members. It was enjoyable to work with you all. Thank you!